He was the founder of logotherapy, a school of psychotherapy which describes a search for a life meaning as the central human motivational force.[3] Logotherapy is part of existential and humanistic psychology theories.[4]

Logotherapy was recognized as the third school of Viennese Psychotherapy. The first school by Sigmund Freud, and the second school by Alfred Adler.

Frankl published 39 books.[5] The autobiographical Man’s Search for Meaning, a best-selling book, is based on his experiences in various Nazi concentration camps.

Frankl was born the middle of three children to Gabriel Frankl, a civil servant in the Ministry of Social Service, and Elsa (née Lion).[1] His interest in psychology and the role of meaning developed when he began taking night classes on applied psychology while in junior high school.[1] As a teenager he began corresponding with Sigmund Freud, when he asked for permission to publish one of his papers.[7][8] After graduation from high school in 1923, he studied medicine at the University of Vienna. During his studies, he specialized in neurology and psychiatry, with a focus on depression and suicide.

In 1924, Frankl’s first scientific paper was published in The International Journal of Psychoanalysis.[9] In the same year, he was president of the Sozialistische Mittelschüler Österreich, the Social Democratic Party of Austria’s youth movement for high school students.[1] During this time Frankl began questioning the Freudian approach to psychoanalysis. He joined Alfred Adler’s circle of students and had his second scientific paper, Psychotherapy and Worldview (Psychotherapie und Weltanschauung) published in Adler’s International Journal of Individual Psychology in 1925.[1] Frankl was expelled from Adler’s circle[2] when he insisted that meaning was the central motivational force in human beings. From 1926, he began refining his theory, which he termed logotherapy.[10]

Between 1928 and 1930, while still a medical student, he organized youth counselling centers[11] to address the high numbers of teen suicides occurring around the time of end of the year report cards. The program was sponsored by the city of Vienna and free of charge to the students. Frankl recruited other psychologists for the center, including Charlotte Bühler, Erwin Wexberg and Rudolf Dreikurs. In 1931 not a single Viennese student died by suicide.[12][unreliable source?]

After obtaining his M.D. in 1930, Frankl gained extensive experience at Steinhof Psychiatric Hospital where he was responsible for the treatment of suicidal women. In 1937, he began a private practice, but the Nazi annexation of Austria in 1938 limited his ability to treat patients.[1] In 1940 he joined Rothschild Hospital, the only hospital in Vienna still admitting Jews, as head of the neurology department. Prior to his deportation to the concentration camps, he helped numerous patients avoid the Nazi euthanasia program that targeted the mentally disabled.[2][13]

In 1942, just nine months after marrying his wife, Frankl and his family were sent to the Theresienstadt concentration camp. His father died there of starvation and pneumonia. In 1944, Frankl and the surviving members of his family were taken to Auschwitz, where his mother and brother were gassed. His wife died later of typhus in Bergen-Belsen. Frankl himself spent a total of three years in four different concentration camps.[6]

Following the war, he became head of the neurology department of the Vienna Polyclinic Hospital and established a private practice in his home. He actively worked with patients until his retirement in 1970.[2]

In 1948, Frankl earned a PhD in philosophy from the University of Vienna. His dissertation, The Unconscious God, examines the relation of psychology and religion.[14] In this, Frankl advocates for the use of the Socratic dialogue (self-discovery discourse) to be used with clients, to get in touch with their spiritual unconscious.[15] 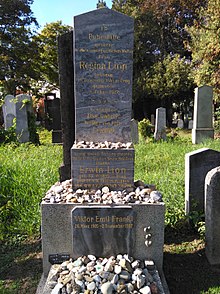 Grave of Viktor Frankl in Vienna

In 1955, Frankl was awarded a professorship of neurology and psychiatry at the University of Vienna, and as visiting professor, he lectured at Harvard University (1961), at Southern Methodist University, Dallas (1966), and at Duquesne University, Pittsburgh (1972).[10]

Throughout his career, Frankl argued that the reductionist tendencies of early psychotherapeutic approaches dehumanised the patient, and advocated for a rehumanisation of psychotherapy.[16]

The American Psychiatric Association awarded Frankl the 1985 Oskar Pfister Award for his contributions to religion and psychiatry.[16]

After his liberation, he was able to return to Vienna. There he became the head of the Neurological Department at the general Polyclinic Hospital.[clarification needed]Then he wrote Man’s Search for Meaning over a nine-day period.[17] The book, originally titled A Psychologist Experiences the Concentration Camp, was released in German in 1946. Millions of copies were sold out in dozens of languages.

The English translation of Man’s Search for Meaning was published in 1959 and became an international bestseller.[2] Frankl saw this success as a symptom of the “mass neurosis of modern times” since the title promised to deal with the question of life’s meaningfulness.[18]

In 1991, Man’s Search for Meaning was listed as one of the ten most influential books in the U.S. by respondents in a survey conducted for the Library of Congress and the Book of the Month Club.[19]

Frankl developed logotherapy and existential analysis, which are based on philosophical and psychological concepts, particularly the desire to find a meaning in life and free will.[20][21] Frankl identified three main ways of realizing meaning in life: by making a difference in the world, by having particular experiences, or by adopting particular attitudes.

The primary techniques offered by logotherapy and existential analysis are:[22][20][21]

His acknowledgement of meaning as a central motivational force and factor in mental health is his lasting contribution to the field of psychology. It provided the foundational principles for the emerging field of positive psychology. (Source)