Zinaida Serebriakova was born on the estate of Neskuchnoye near Kharkov (now Kharkiv, Ukraine) into one of the most refined and artistic families in the Russian Empire.

She belonged to the artistic Benois family. Her grandfather, Nicholas Benois, was a famous architect, chairman of the Society of Architects and member of the Russian Academy of Science. Her uncle, Alexandre Benois, was a famous painter, founder of the Mir iskusstva art group. Her father, Yevgeny Nikolayevich Lanceray, was a well-known sculptor, and her mother, who was Alexandre Benois’ sister, had a talent for drawing. One of Zinaida’s brothers, Nikolay Lanceray, was a talented architect, and her other brother, Yevgeny Yevgenyevich Lanceray, had an important place in Russian and Soviet art as a master of monumental painting and graphic art. The Russian-English actor and writer Peter Ustinov was also related to her.

In 1900, she graduated from a women’s gymnasium (equivalent to grammar school or high school), and entered the art school founded by Princess Maria Tenisheva. She studied under Repin in 1901, and under portrait artist Osip Braz between 1903 and 1905. From 1902 to 1903 she spent time in Italy, and from 1905 to 1906 she studied at the Académie de la Grande Chaumière in Paris.

In 1905, she married her first cousin, Boris Serebriakov, the son of Evgenyi’s sister, and took his surname. Boris went on to become a railroad engineer. 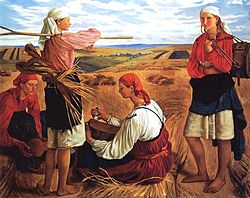 From her youth onwards, Zinaida Serebriakova strove to express her love of the world and to show its beauty. Her earliest works, Country Girl (1906, Russian Museum) and Orchard in Bloom (1908, private collection), speak eloquently of this search, and of her acute awareness of the beauty of the Russian land and its people. These works are études done from nature, and though she was young at the time, her extraordinary talent, confidence and boldness were apparent.

Broad public recognition came with Serebriakova’s self-portrait At the Dressing-Table (1909, Tretyakov Gallery), first shown at a large exhibition mounted by the Union of Russian Artists in 1910. The self-portrait was followed by Girl Bathing (1911, Russian Museum), a portrait of Ye.K. Lanceray (1911, private collection), and a portrait of the artist’s mother Yekaterina Lanceray (1912, Russian Museum), already mature works, strict in composition.

She joined the Mir iskusstva movement in 1911, but stood out from the other members of the group because of her preference for popular themes and because of the harmony, plasticity and generalized nature of her paintings.

From 1914 to 1917, Serebriakova was in her prime. During these years, she produced a series of pictures on the theme of Russian rural life, the work of the peasants and the Russian countryside which was so dear to her heart: Peasants (1914–1915, Russian Museum), Sleeping Peasant Girl (private collection).

The most important of these works was Bleaching Cloth (1917, Tretyakov Gallery), which revealed Zinaida Serebriakova’s striking talent as a monumental artist. The figures of the peasant women, portrayed against the background of the sky, gain majesty and power by virtue of the low horizon.

When, in 1916, Alexander Benois was commissioned to decorate the Kazan Railway Station in Moscow, he invited Yevgeny Lanceray, Boris Kustodiev, Mstislav Dobuzhinsky, and Serebriakova to help him. Serebriakova took on the theme of the Orient: India, Japan, Turkey, and Siam are represented allegorically in the form of beautiful women. At the same time, she began compositions on subjects from classical mythology, but these remained unfinished.

At the outbreak of the October Revolution in 1917, Serebriakova was at her family estate of Neskuchnoye, and suddenly her whole life changed. In 1919, her husband Boris died of typhus. She was left without any income, responsible for her four children and her sick mother. All the reserves of Neskuchnoye had been plundered, so the family suffered from hunger. She had to give up oil painting in favour of the less expensive techniques of charcoal and pencil. This was the time of her most tragic painting, House of Cards, which depicts their four fatherless children.

She did not want to switch to the futurist style popular in the art of the early Soviet period, nor paint portraits of commissars, but she found some work at the Kharkov Archaeological Museum, where she made pencil drawings of the exhibits. In December 1920, she moved to her grandfather’s apartment in Petrograd. After the October Revolution, inhabitants of private apartments were forced to share them with additional inhabitants, but Serebriakova was lucky – she was quartered with artists from the Moscow Art Theatre. Thus, Serebriakova’s work during this period focuses on theatre life. Also around this time, Serebriakova’s daughter, Tatiana, entered the academy of ballet, and Serebriakova created a series of pastels on the Mariinsky Theater.

In the autumn of 1924, Serebriakova went to Paris, having received a commission for a large decorative mural. On finishing this work, she intended to return to the Soviet Union, where her mother and the four children remained. However, she was not able to return, and although she was able to bring her younger children, Alexandre and Catherine, to Paris in 1926 and 1928 respectively, she could not do the same for her two older children, Evgenyi and Tatiana, and did not see them again for many years.

After this, Serebriakova traveled a great deal. In 1928 and 1930, she traveled to Africa, visiting Morocco. During a six-week trip to Morocco in December 1928, she created more than 130 portraits and cityscapes which she called “sketches,” drawn in haste as none of the locals would agree to pose, and only three landscapes for fear of straying too far from Marrakech. She was fascinated by the landscapes of northern Africa and painted the Atlas mountains, as well as Arab women and Africans in ethnic clothing. She also painted a cycle devoted to Breton fishermen. The salient feature of her later landscapes and portraits is the artist’s own personality — her love of beauty, whether in nature or in people.

In 1947, Serebriakova at last took French citizenship, and it was not until Khruschev‘s Thaw that the Soviet Government allowed her to resume contact with her family in the Soviet Union. In 1960, after 36 years of forced separation, her older daughter, Tatiana (Tata), was finally allowed to visit her. At this time, Tatiana was also working as an artist, painting scenery for the Moscow Art Theatre.

Serebriakova’s works were finally exhibited in the Soviet Union in 1966, in Moscow, Leningrad, and Kiev, to great acclaim. Her albums sold by the millions, and she was compared to Botticelli and Renoir. Serebriakova rejoiced at success in her homeland. However, although she sent about 200 of her works to be shown in the Soviet Union, the bulk of her work remains in France today.

Serebriakova died after a brain hemorrhage in Paris on 19 September 1967, at the age of 82. She is buried in Paris, at the Russian cemetery at Sainte-Geneviève-des-Bois. (Source)

2021-09-19
Previous Post: The Guardian – ‘Heck of a ride’: SpaceX’s historic amateur astronauts splash down safely in Atlantic
Next Post: The bath-house – Zinaida Serebriakova