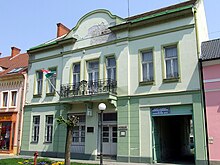 The family home in Mohács

Endre Rozsda was born in Mohács, a small city along the Danube in Hungary. His childhood memories marked his entire artistic work. The creative method he developed helped him to conjure a unique surrealistic world based on his memories:

Out of memory and light I weave a dense fabric. I look steadily at it until it comes to life and stares back at me, until it rises up in front of me. It’s time that I want to get hold of, arrange and evaluate. Time is that bright, multi-colored oblivion where joys and sufferings turn into precious beads. Around time’s beads I twist the ivy of my own memories. I don’t want to assess or explain anything. I want to understand. I lay my head against time and listen to what it tells me.[1]

Rejecting his family’s plans for a career, he decided to become a painter at an early age. He acquired the basic skills of the trade in the school of Vilmos Aba-Novák. His first solo exhibition, held in the ‘Tamás’ gallery at age 23 (1936), was a great success. Critics praised his work and the Museum of Fine Arts, Budapest bought one of his paintings. “Rozsda is a stunning major talent. Few have ever painted old women and beggars the way he does. … In some of his beautiful images a veil of fog and light is woven, turning reality into a melodic chimera”, a critic writing for Est praised the young painter.

His early artistic period, closely tied to Hungarian post-impressionism, came to an end after attending a Béla Bartók concert. His early successes notwithstanding, after listening to Bartók he came to understand that “I am not my own contemporary”.[2] With sculptor Lajos Barta, he moved to Paris (1938), where he continued his studies at the École de Louvre. There he befriended Árpád Szenes, Vieira da Silva and Françoise Gilot (later Picasso’s companion for a decade) who became his student for a while. He also became acquainted with Max Ernst and Alberto Giacometti. His thinking underwent fundamental change and came closer to Surrealism. Following the German occupation, he was forced to return to Budapest (1943) where his unique surrealistic style fully matured (Sacred and Profane Love, 1947; Musée des Beaux-Arts de Dijon).

After the war, he played an active role in the establishment of the European School and showed his work regularly in group shows. According to art historian, Krisztina Passuth, Endre Rozsda was one of the most prominent figures of the European School.[3] In 1948 the group disbanded because the new regime did not tolerate abstract surrealist art. In the next few years Rozsda worked on book illustrations, painted in secret and, obviously, could not show his work in public.

Following the suppression of the Hungarian Revolution of 1956 he permanently returned to France. He came into contact with Raymond Queneau and André Breton, who wrote an introduction for his exhibition at the ‘Furstenberg’ Gallery (1957). He participated in the International Exhibition of Surrealism in Milan (1961). A few years later he won the Copley-Prize (1964) from a jury composed of Hans Arp, Roberto Matta, Max Ernst, Man Ray, Roland Penrose, Sir Herbert Read and Marcel Duchamp.

Endre Rozsda and Péter Esterházy at an opening in Várfok Gallery

From the start of the 1960s, Rozsda’s work underwent another change: the tensions and harmonies of architectonic structures and swirling colors created a richly detailed microcosm. In his effort “to control time” and dissolve reality in his imagination he continued to rely on Surrealism, although his means of expression became increasingly characterized by lyrical abstraction.

In 1970 he became a French citizen. In 1979 he set up a studio in Le Bateau-Lavoir and continued to work there until the end of his life.

The last exhibition he attended in person was held in Várfok Gallery and opened by the writer Péter Esterházy (1999):

Just like nature itself, these pictures are difficult to disclose. They necessitate absorbed looking, long and silent. (What doesn’t…) And still, they speak at the first glance. They obviously don’t say the same thing, but they seem to have a common melodic structure. And this common melodic structure – I may be wrong, and once more abusively speak only about myself – is rather anachronistic, does not conform with their time: it seems that Rozsda’s pictures say that the world is beautiful. Maybe this is precisely surrealism. Surrealism as ethical attitude?” … I’d like to wrap my books into these canvases, they would feel good in there.[4]

Endre Rozsda recalled the beginnings as follows: “I started to learn painting in the Free School of Aba-Novák. I became his apprentice. This was the most important artistic and human experience in all my life. It was a great stroke of luck that I learned painting outside the Academy of Fine Arts were training was extremely academic at the time. Aba-Novák was a good painter, although far from revolutionary. He had a rich and free personality.”[2]

Aba-Novák and Rozsda often painted in plein air. Next to his master, he also worked on frescoes decorating churches and public monuments.

His paintings from that time are defined by a sensibility informed by post-Impressionism. Initially, he painted landscapes bathed in mystical and subtle sunlight, as well as thinly painted portraits composed with large color patches. For some time, instead of distancing himself from naturalistic representation, he looked for the next stage of development and a personal vision by applying bold cropping and, after pastel-soft landscapes, by creating at times gloomy and melancholic, at times vigorous and vibrant still lives. Wispy colors were gradually taken over by expressive deep reds, yellows and purples to create tensions. A sensitive representation of everyday objects and people were replaced by suggestive forms painted with a broad brush.

He had his first solo show in the middle of this period in the Tamás Gallery, with a dedication written by Aba-Novák. The Budapest daily Pesti Napló said of Rozsda:

He’s all but 22 years old and astonishingly talented. Full of energy, subtle tensions, a healthy dose of pride and a keen appetite for experimentation … Clearly, he had excellent schooling: under the tutelage of Aba-Novák he acquired professional skills of the highest order. He draws, paints, models and composes with supreme confidence and clears the initial obstacles of exhilarating and wild exploits with apparent ease. His master is right to claim that Rozsda’s developed pictorial vision belies his age.[5]

With his style far ahead of academic trends yet this side of the avant-garde, apparently everything was in place for him to join one of the artistic currents popular at the time in Hungary. That’s when he encountered the most important artistic influence of his life that left a radical impact on his thinking and work. (Source)