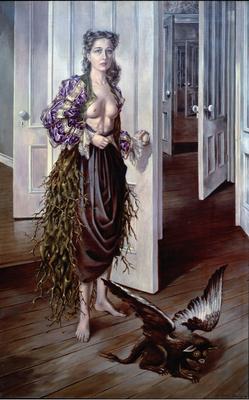 Dorothea Tanning was born and raised in Galesburg, Illinois. She was the second of three daughters to Andrew Peter Tanning (born Andreas Peter Georg Thaning; 1875–1943) and Amanda Marie Hansen (1879–1967), who named her for her maternal grandmother. After graduating from Galesburg Public High School in 1926, Tanning worked in the Galesburg Public Library (1927) and attended Knox College (1928–30). After two years of college she quit to pursue an artistic career, moving first to Chicago in 1930 and then to New York in 1935, where she supported herself as a commercial artist while working on her own painting. Tanning was married briefly to the writer Homer Shannon in 1941, after an eight-year relationship.[1]

In New York, Tanning discovered Surrealism at the Museum of Modern Art‘s seminal 1936 exhibition, Fantastic Art, Dada and Surrealism. In 1941, impressed by her creativity and talent in illustrating fashion advertisements, the art director at Macy’s department store introduced her to the gallery owner Julien Levy, who immediately offered to show her work. (Tanning would also become good friends with Levy and his wife, the painter Muriel Streeter, as seen in letters they exchanged in the 1940s.[2]) Levy gave Tanning two solo exhibitions (in 1944 and 1948), and also introduced her to the circle of émigré Surrealists whose work he was showing in his New York gallery, including the German painter Max Ernst.[3]

Tanning first met Ernst at a party in 1942. Later he dropped by her studio to consider her work for inclusion in the 1943 Exhibition by 31 Women at the Art of This Century gallery in New York.,[4] which was owned by Peggy Guggenheim, Ernst’s wife at the time. As Tanning recounts in her memoirs, he was enchanted by her iconic self-portrait Birthday (1942, Philadelphia Museum of Art). The two played chess, fell in love, and embarked on a life together that took them to Sedona in Arizona, and later to France.[5][6] They lived in New York for several years before moving to Sedona, where they built a house and hosted visits from many friends crossing the country, including Henri Cartier-Bresson, Lee Miller, Roland Penrose, Yves Tanguy, Kay Sage, Pavel Tchelitchew, George Balanchine, and Dylan Thomas. Tanning and Ernst were married in 1946 in a double wedding with Man Ray and Juliet Browner in Hollywood and they were married for 30 years.[7][8]

In 1949, Tanning and Ernst relocated to France, where they divided their time between Paris and Touraine, returning to Sedona for intervals through the early and mid 1950s. They lived in Paris and later Provence until Ernst’s death in 1976 (he had suffered a stroke a year earlier), after which Tanning returned to New York.[9] She continued to create studio art in the 1980s, then turned her attention to her writing and poetry in the 1990s and 2000s, working and publishing until the end of her life. Tanning died on 31 January 2012, at her Manhattan home at age 101.[10][11] 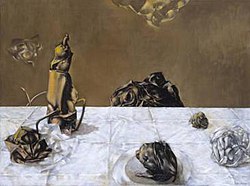 Apart from three weeks she spent at the Chicago Academy of Fine Art in 1930,[13] Tanning was a self-taught artist.[14] The surreal imagery of her paintings from the 1940s and her close friendships with artists and writers of the Surrealist Movement have led many to regard Tanning as a Surrealist painter, yet she developed her own individual style over the course of an artistic career that spanned six decades.

Tanning’s early works—paintings such as Birthday and [ Eine kleine Nachtmusik] (1943, Tate Modern, London)[15]—were precise figurative renderings of dream-like situations. Tanning read many Gothic and Romantic novels from her local library in her hometown of Galesburg. These fantastical stories, filled with imagery of the imaginary, heavily influenced her style and subject matter for years to come.[16] Like other Surrealist painters, she was meticulous in her attention to details and in building up surfaces with carefully muted brushstrokes. Through the late 1940s, she continued to paint depictions of unreal scenes, some of which combined erotic subjects with enigmatic symbols and desolate space. During this period she formed enduring friendships with, among others, Marcel Duchamp, Joseph Cornell, and John Cage. She also designed sets and costumes for several of George Balanchine‘s ballets, including The Night Shadow (the original version of his ballet La Sonnambula, which premiered in 1946 at City Center of Music and Drama in New York), and performed in two of Hans Richter‘s avant-garde films, Dreams That Money Can Buy (1947) and 8 x 8: A Chess Sonata in 8 Movements (1957).

Over the next decade, Tanning’s painting evolved, becoming less explicit and more suggestive. Now working in Paris and Huismes, France, she began to move away from Surrealism and develop her own style. During the mid-1950s, her work radically changed and her images became increasingly fragmented and prismatic, exemplified in works such as Insomnias (1957, Moderna Museet, Stockholm). As she explains, “Around 1955 my canvases literally splintered… I broke the mirror, you might say”. 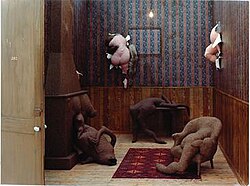 By the late 1960s, Tanning’s paintings were almost completely abstract, yet always suggestive of the female form. From 1969 to 1973, Tanning embarked on what she described as “an intense five- year adventure in soft sculpture,”[7] concentrating on a body of three-dimensional works in fabric. Five of these sculptures comprise the installation Hôtel du Pavot, Chambre 202 (1970–73) that is now in the permanent collection of the Musée National d’Art Moderne at the Centre Georges Pompidou, Paris. During her time in France in the 1950s to 1970s, Tanning also became an active printmaker, working in ateliers of Georges Visat and Pierre Chave and collaborating on a number of limited edition artists’ books with such poets as Alain Bosquet, Rene Crevel, Lena Leclerq, and André Pieyre de Mandiargues.[17] After her husband’s death in 1976, Tanning remained in France for several years with a renewed concentration on her painting. By 1980 she had relocated her home and studio to New York and embarked on an energetic creative period in which she produced paintings, drawings, collages, and prints.

Tanning’s work has been recognized in numerous one-person exhibitions, both in the United States and in Europe, including major retrospectives in 1974 at the Centre National d’Art Contemporain in Paris (which became the Centre Georges Pompidou in 1977), and in 1993 at the Malmö Konsthall in Sweden and the at the Camden Arts Centre in London. The New York Public Library mounted a retrospective of Tanning’s prints in 1992,[18] and the Philadelphia Museum of Art mounted a small retrospective exhibition in 2000 entitled Birthday and Beyond to mark its acquisition of Tanning’s celebrated 1942 self-portrait, Birthday. In 2018, Museo Nacional Centro de Arte Reina Sofía, Madrid, held a major exhibition of the artist’s work,[19] curated by Alyce Mahon, which travelled to the Tate Modern, London in 2019.[20] 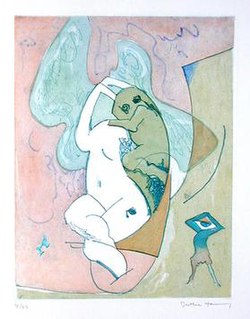 Tanning wrote stories and poems throughout her life, with her first short story published in VVV in 1943[21] and original poems accompanying her etchings in the limited edition books Demain (1964)[22] and En chair et en or (1973).[23] However, it was after her return to New York in the 1980s that she began to focus on her writing. In 1986, she published her first memoir, entitled Birthday for the painting that had figured so prominently in her biography. It has since been translated into four other languages. In 2001, she wrote an expanded version of her memoir called Between Lives: An Artist and Her World.

With the encouragement of her friend and mentor James Merrill (who was for many years Chancellor of the Academy of American Poets),[24] Tanning began to write her own poetry in her eighties, and her poems were published regularly in literary reviews and magazines such as The Yale Review, Poetry, The Paris Review, and The New Yorker until the end of her life. A collection of her poems, A Table of Content, and a short novel, Chasm: A Weekend, were both published in 2004. Her second collection of poems, Coming to That, was published by Graywolf Press in 2011.

In 1994, Tanning endowed the Wallace Stevens Award of the Academy of American Poets, an annual prize of $100,000 awarded to a poet in recognition of outstanding and proven mastery in the art of poetry. (Source)